Brutally Candid Feedback:
Why It's Crucial To Your Success in HR...

As a kid, I remember my mom rubbing antiseptic ointment onto my bloodied knee after falling off my bike.
"It hurts!" I sobbed.
"That means it's working," she said wisely.

Sometimes what's good for you hurts a little too. And getting brutally candid feedback about your job performance is one of those things.

Feedback can be uncomfortable and often stings.

It's never easy hearing it, even if it's constructive. Some people fear getting the direct, unsugarcoated, "in-your-face" brand of honesty. Their egos get in the way of digesting it and acting on it.

However, if you want to advance your career in HR, getting this kind of feedback is absolutely indispensable.

And that's precisely what Randy McDonald received when he was an HR director.

In the book, The Chief HR Officer, Randy described himself as young and ambitious at the time he was trying to position himself for a key promotion. He had racked up an impressive list of accomplishments.

And at performance review time, he proudly described all the things he had achieved. When he was done, his boss looked at him and said, "Well, that's an impressive list, Randy. Very impressive. But...you've failed!"

Stunned, Randy thought he must have been misunderstood. So he began again, rattling off all his accomplishments -- this time even more emphatically.

His manager stopped him and said, "I heard you the first time."

"You did a lot. But you did it... ALONE! And that means you failed at the most important part of your job: building a successful team and influencing others. According to your clients and your staff, you do things too independently and you do not engage and bring your people along with you."

Randy was crushed upon hearing these comments.

He hadn't heard them before. He was surprised. But he pushed past his emotions and asked questions to dig deeper to gain a better understanding. What his boss told him was that he was smart, innovative and ambitious and these were all good qualities to have. That was the good news.

However, he went to say, as an HR leader, his performance wasn't good enough to move his career forward. Especially if he didn't learn how to use the talents and abilities of his people. And overall, at this juncture, in his view Randy had flunked the test of HR leadership.

This brutally honest assessment of his performance was not only hard for Randy to hear, but difficult to accept.

Getting good, direct, actionable feedback from your boss, clients or colleagues is tough to obtain, even if you're prepared to accept it.

It was a big setback. And he spent many days reflecting and agonizing over his boss's comments. But rather than ignore what he heard, he decided to embrace the feedback he received. And he worked hard to take action to improve his leadership skills. But it wasn't easy. And he never forgot this painful episode.

However, the story doesn't end there.

After years of tireless effort, something remarkable happened to Randy in 2008... He was appointed senior vice president of Human Resources at IBM.

And not only that ... he was also recognized as the HR Executive of the Year by Human Resources Executive magazine! He was the only HR leader on the planet to receive the honor that year.

In accepting his award, Randy pointed to that candid feedback he received from his boss early in his career as one the most powerful catalysts for his success.

Randy's experience with direct feedback is not unique among the leaders in our profession. 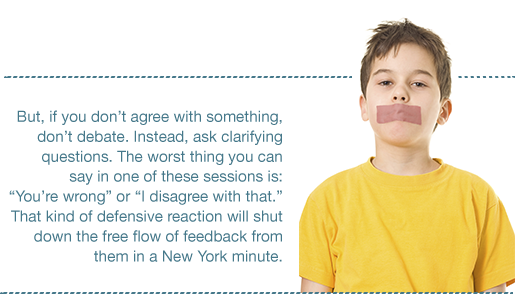 Just about all of them would tell you that getting it on an ongoing basis is an important component in their growth and career advancement. And it should be for you as well.

However, this is easier said than done.

Getting good, direct, actionable feedback from your boss, clients or colleagues is tough to obtain, even if you're prepared to accept it. And the reason is that many people are uncomfortable providing it. They don't want hurt feelings.

And as a result, they'll either sugarcoat their comments or cloak their statements in vague, cushy or fuzzy language that leaves you uncertain about what they really mean.

What do you do when this happens?

When they've concluded with their comments, you should treat their feedback the same way you would when receiving any gift. And that is to say, "Thank you!"

That all said, here's a summary of the gospel on feedback:

Finally, make no mistake about it. Getting candid feedback can feel as uncomfortable as a bloodied knee. But to paraphrase my mom: Sometimes what hurts a bit at first, can be good for you too in the long run when you take the right action against it. Onward!

About the author: Alan Collins is Founder of SuccessInHR.com and specializes in helping HR professionals take their careers to the next level. He has authored three best-selling books: Winning Big in HR, Unwritten HR Rules and Best Kept HR Secrets - all available on Amazon. Alan was formerly Vice President -- Human Resources at PepsiCo, where he led HR initiatives for their Quaker Oats, Gatorade and Tropicana businesses.